To understand Deshaun Thomas’ journey, it is necessary to understand the context in which he grew up, in Indiana. In the United States it is called basketball in 49 states but then there is Indiana where it is something more than a sport. In a lot of communities, it is a reason for living, a lifestyle, it is something that really matters. It can affect the mood of an entire community. Since 1911, every year a high school has won the state championship and it is big news all over the place. In 1954 the state title was won by a small school from a small town called Milan. That school had fewer than 200 students, but its team was able to defeat the big Muncie Central High which had ten times as many students. That historic win gained worldwide prominence many years later when it became a film starring Gene Hackman, “Hoosiers”. Hoosiers is the hardly translatable nickname that in popular culture identifies the Indiana residents or more generally people from the countries, the so-called hicks. Two years after the Milan High School triumph, the title was won by the Crispus Attucks of Indianapolis, led by the great Oscar Robertson, the first all-African Americans school to win. In 1989 the tournament championship game, at the Hoosier Dome in Indianapolis, was attended by 41,000 fans. Since 1939, the Mr. Basketball Award has been awarded annually to the best high school player in the state. In the roll of honor of the trophy there are players such as Oscar Robertson, Larry Bird, Glenn Robinson, Greg Oden, Eric Gordon.

Since 1997, the state high school tournament is no longer a single tournament, open to every school. To reduce the gigantism of the competition, the schools have been divided into four categories. In 2008 and 2009, one of the four titles was won by the Bishop Luers High School of Fort Wayne, led by – yes! – Deshaun Thomas. The school had never won the championship before and has never won since. Before Deshaun it was ignored by the big college scouts and the gym that hosts its home games was always half-empty. During Deshaun time at the school, the gym was filled with fans and scouts. Thomas finished his high school career as the third-best scorer in the history of the state high school basketball. And in 2010 he received the highest honor – he was named Mr. Basketball. Like Oscar Robertson and Larry Bird. Like Big Dog Robinson. His number 1 jersey has been retired, the first in the history of the Fort Wayne school, no matter what sport. He affected many people: his coach, James Blackmon, a former Kentucky star, moved on to coach the big and powerful Marion High School.

Thomas could have gone to any college he wanted to choose, but from the very beginning he had given his word to Thad Matta: he would play for him at Ohio State, in the same Big Ten conference that Indiana University was competing in. In his own state, he became not an enemy but an opponent. But Ohio State assured him three seasons of high-level basketball. In fact, he finished his college career as a 14.4-point per game scorer.

When Thomas joined the Buckeyes, Ohio State was an extraordinary team that won its first 24 games of the season, was named No. 1 in the national ranking, won its own conference but was eliminated one game away from the NCAA Final Four by Kentucky, a battle lost by two points of margin. Thomas was the sixth man of a team formed by some experienced players, including David Lighty (now in Villeurbanne) and Jon Diebler, who had an important career especially in Turkey, and young stars such as Jarred Sullinger and the former Trento point guard, Aaron Craft. The second season was very different for Thomas: the minutes spent on the court went from 14.0 to 31.4, the points from 7.5 to 15.9, the rebounds from 3.5 to 5.4. It was another extraordinary season: the Buckeyes won 13 of their first 14 games. The only defeat, on the road, in Kansas, was in a sense prophetic, because Kansas would be the same team that Ohio State would later meet in the semifinals game at the New Orleans’ Final Four. Ohio State lost 64-62, the second consecutive elimination by a two-point margin. Deshaun’s task in that game should have been purely defensive, against the Kansas huge star, Thomas Robinson, a task made almost impossible by the foul troubles that plagued his game since the first half. Thomas had a career high of 31 points against Loyola-Maryland in the NCAA Tournament, and he also scored 30 points against South Carolina, 25 against Michigan and during the Big Ten tournament he scored 22 points in two consecutive games against Purdue and Michigan. He also scored 18 points and grabbed seven rebounds when Ohio State knocked out Gonzaga in the second round of the NCAA Tournament, the team led by Kevin Pangos. 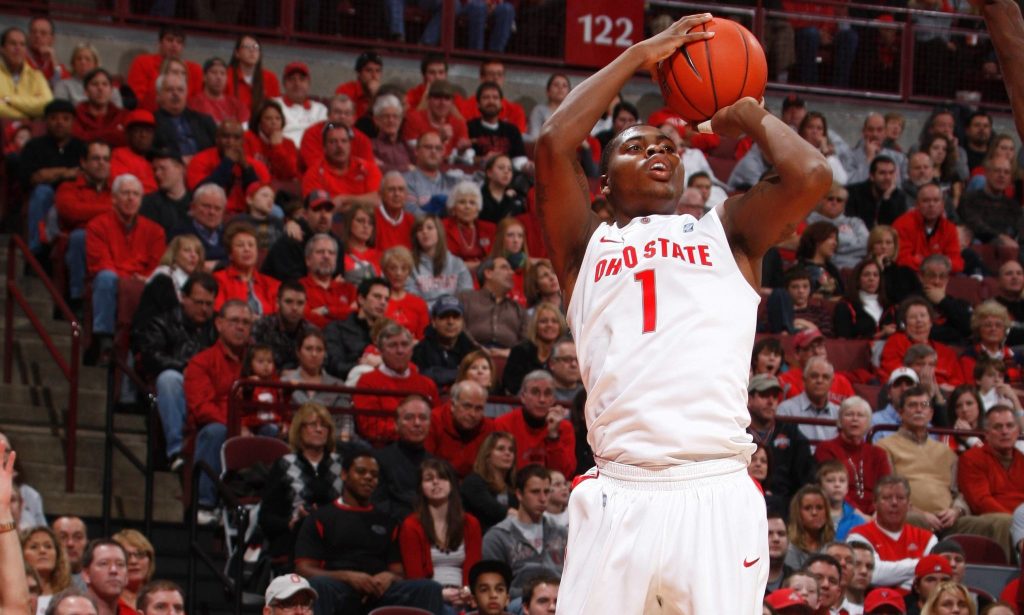 During his third season at Ohio State, Thomas did even better, averaging 19.8 points and 5.9 rebounds per game. For the Buckeyes, it was another memorable season: Thomas had a tremendous game against Indiana on the road when he scored 18 points and secured the win for the Buckeyes against a team ranked at the number 1 spot nationally. Ohio State won the Big Ten tournament by beating Michigan State and Wisconsin in the two finals games, in which he scored 33 points combined. He was named to the Big Ten conference first team and led the conference in scoring. During the NCAA Tournament, he came up one game short from another Final Four appearance, when Ohio State lost to Wichita State. He still had a year of eligibility to spend at Ohio State but decided to declare for the NBA draft. “It has been an unforgettable three years that have helped me grow as a player and as a person,” he said. But it was time to fulfill the dream and become a professional player.

The San Antonio Spurs picked him at the end of the second round of the 2013 NBA draft, at number 58. Getting into the NBA like that isn’t easy. Thomas moved to Europe postponing his NBA aspirations, although San Antonio retained his NBA rights. He was signed by Nanterre, who would play in the EuroLeague that season. Deshaun’s coming-out game in Europe was played, on October 31, 2013, when Nanterre obtained perhaps the biggest win in its history by stealing an unforgettable game at Palau Blaugrana against Barcelona. Thomas scored 15 points and added seven rebounds. Nanterre did not manage to qualify for the Top 16 but it gave Thomas the opportunity to play eight more quality Eurocup games (he averaged 13.8 points per game). That rookie season opened the doors of Barcelona where he was used primarily at the small forward position. Thomas averaged 7.1 points over his second EuroLeague season, in about 19 minutes of playing time. But that was Real Madrid’s season in Spain and Europe.

At the end of the year, Deshaun tried to get to the NBA, returning to San Antonio and then playing in the G-League. In the end, not much came out of it and in 2016 he returned to Europe to play for Efes, which was not yet the Efes it is now but was good enough to make the playoffs. The turning point came the following season when he was playing at Maccabi, averaged 11.5 points per game and led the team to the Israeli championship, a feat that he repeated the following season in Greece with Panathinaikos. The 2019/20 season in Athens was the best of his career, 13.9 points per game in EuroLeague, 4.4 rebounds, 29.9 minutes on the court. He was basically the EuroLeague best combo forward. “Pound for pound he is one of the EuroLeague best players,” his coach at the time, Rick Pitino said. The following year, he decided to take a season away from the EuroLeague, signing in Japan. Last season, he was at Bayern Munich where he shot a career-high 50.0 percent from three. In the playoffs, against Barcelona, ​​he had a zero points nightmare in Game 1, but bounced back strongly scoring 25 points at Palau in Game 2, leading Bayern to a huge upset.

Milan is his seventh European team, the seventh with which he will play in the EuroLeague. This is some kind of record. He has played 197 games in the top competition, he is 58 points shy of 2,000 in his career, has hit 220 threes, with 37 percent accuracy for his career. He has won two national titles and two national cups. At Olimpia, the goal is to increase these numbers. He had come to Europe straight from college, and over the years he has become a respected veteran, a leader. In Fort Wayne he is still a celebrity. Wane 15, the local stations, dedicated a one-minute and 42-second report to his signing for Olimpia, adding an interview given to them early in the summer. When you were Mr. Basketball in Indiana, you are Mr. Basketball forever.