The FIBA World Ranking Men, presented by NIKE has been updated after the conclusion of the FIBA Basketball World Cup 2019, with USA maintaining their top-ranked status but the newly-crowned World Cup champions Spain closing in the gap

The FIBA World Ranking Men, presented by NIKE has been updated after the conclusion of the FIBA Basketball World Cup 2019, with USA maintaining their top-ranked status but the newly-crowned World Cup champions Spain closing in the gap.

There was significant movement at the top end of the ranking, with Australia (673.6) climbing to third place and leapfrogging the fourth-ranked Argentina (670.5) and fifth-placed France (665.4) in the process.

Coming into the World Cup as the #11 ranked team, Australia received extra points for beating higher-ranked teams in France and Lithuania en route to their best-ever performance at the flagship event.

As the ranking takes into account results from the past eight years, the Boomers also benefited from a great run of results in major tournaments with their fourth-place finish in China coming on the back of a Semi-Finals appearance at the 2016 Rio Olympics and winning the FIBA Asia Cup in 2017.

World Cup runners-up Argentina also moved up a spot at the expense of France, whose overall point tally did increase at the World Cup, but not enough to compensate for the gains made by Australia and Argentina.

With results at the beginning of the eight-year period gradually having less bearing, the points France acquired from winning EuroBasket 2013 are now weighed at 25 percent, compared to 50 percent in the previous edition of the ranking.

Czech Republic (596.8) and Poland (583.0) were among the highest risers, with their strong showings at the World Cup reflecting in the newly-updated ranking. The Czechs climbed 14 places and are now 10th, while the Poles jumped to 13th place, having gained 12 positions.

The trajectory is also pointing up for some other World Cup participants, as Nigeria, Tunisia, Jordan, Japan, Cote d’Ivoire registered double-digit gains, while the countries losing ground were those not present at the 32-team tournament in China.

The latest edition of the ranking serves as the basis to determine the last eight teams to secure places in next year’s FIBA Olympic Qualification Tournaments. In addition to the 16 teams that earned berths via the FIBA Basketball World Cup, the two top-ranked countries from each region in the ranking join the 24-team Olympic Qualification Tournament field.

Those teams are: Angola and Senegal (Africa), Mexico and Uruguay (Americas), China and Korea (Asia-Oceania), and Croatia and Slovenia (Europe).

The FIBA World Ranking Men, presented by NIKE, will next be updated following February’s Continental Cup Qualifiers. It takes into consideration rating points of games played in top official FIBA competitions and their Qualifiers over the course of an eight-year period. 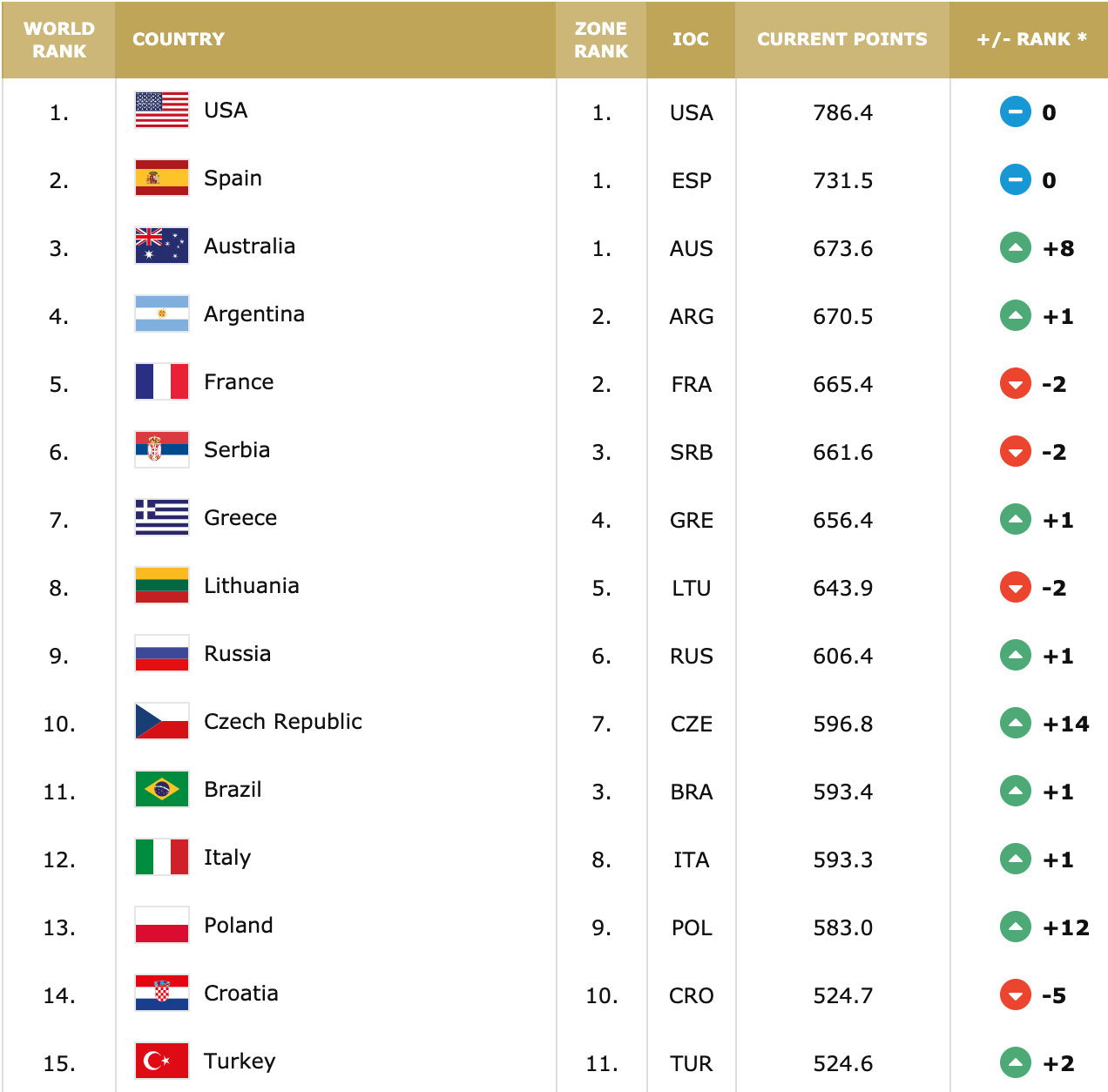