The official Draw Ceremony will take place at the Patrick Baumann House of Basketball, FIBA headquarters, on November 27, 2019.

While no ranking changes occurred among the top 15 countries, ninth-ranked Belgium (557.6) did move a little closer to China (560.3) in total points.

Switzerland (99.0) was the biggest climber, gaining 12 spots and rising to 65th place, after taking a victory against Estonia in the FIBA Women’s EuroBasket 2021 Qualifiers, having gone winless in their previous Qualifiers campaign.

The other big upward movers were also European, with Portugal and Bulgaria each climbing seven spots in the rankings. Portugal is now 47th off the back of their win against Finland, while Bulgaria also squeezed into the Top 50.

The latest ranking serves as the basis to determine the seeds and pots for the draw of FIBA Women’s Olympic Qualifying Tournaments 2020, taking place next week.

The seeds are as follows: 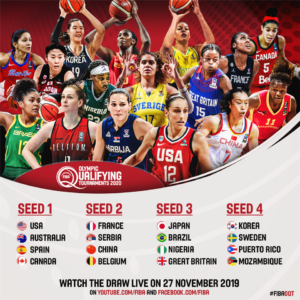 The official Draw Ceremony will take place at the Patrick Baumann House of Basketball, FIBA headquarters, on November 27, 2019, and will sort the 16 qualified teams into four tournaments. The FIBA Women’s Olympic Qualifying Tournaments for 2020 will be hosted in Belgium, China, France and Serbia. The top three teams from each of these tournaments, consisting of four teams each, will qualify for the Tokyo 2020 Olympic Games.

FIBA Women’s Basketball World Cup 2018 champions USA and the hosts of the Olympic Games, Japan, will play in the qualification tournaments but will advance through to the Tokyo 2020 Women’s Olympic Basketball Tournament regardless of their results.

The Draw Ceremony for the FIBA Women’s Olympic Qualifying Tournaments will be live-streamed via the FIBA YouTubechannel and Facebook account.