Let's see some numbers about Fener - Zalgiris and CSKA - Baskonia.

Welcome back to Corner Stats! With the victories in game 4 of CSKA and Fenerbahce, another two quarter-finals ended. Predictions have been respected, but the challenges have all been very interesting. Let’s go then to find some statistical tips of the two series.

The Baskonia fought in an exemplary way against the technical superpower of the Moscow team. Despite having Shengelia just came back from an injury (who has in fact only occasionally shown his immense talent), Granger out for injury and Janning with some problems, it has managed to win an away game and complicate CSKA’s life in Baskonia’s home games.

In game 4, Baskonia was winning for more than half of the match: after a hard-fought start, the Basque team had played its best basketball, even reaching a gap of 18 points. However, in the third quarter, De Colo went on fire, dragging CSKA to the comeback, assisted by all the best teammates. The chart of the Offensive Rating is quite expressive:

Very high values ​​for De Colo, Higgins, Clyburn and also Kurbanov, one of the most efficient 3&Ds in Europe. Observing the line-ups, these four players produced a Net Rating of +82 in game 4 (10 minutes, 132 of Off Rtg, 50 of Def Rtg). They are not only excellent attackers but are also excellent defenders. The comeback, therefore, took place through a superb offensive performance, but also limiting the Baskonia to only 12 points in the final period.

Baskonia, however, has made a great series: as already mentioned, injuries have enormously affected the regular season and playoff, not so much in terms of victories, but rather in the accumulation of fatigue among healthy players.

Poirier has played an outstanding series, which puts him definitively among the best centers of the EuroLeague. In the 4 games his Impact is the following:

Clearly, the Net Rtg ON is negative, given that those stats are based on 3 defeats and 1 win, but if we focus on the Offensive Rating we understand Vincent’s impact on the series.

The other player who certainly has earned an important status at the end of this season is Luca Vildoza. In my opinion, he is the winner of this year’s MIP award. Within the series, there were moments in which he struggled, but if we consider all the series, he showed all his potential and was certainly more suitable than his teammate Huertas.

The real regret for Vitoria’s team is not being able to obtain a ticket for the Final 4 that will be played right there. But on the other hand, the faults are above technical and managerial errors.

Zalgiris also fought a lot, but against Fener’s offensive performance in game 4, nobody in the world probably would have won. Here is the shot chart of that match, kindly offered by @lostgps. 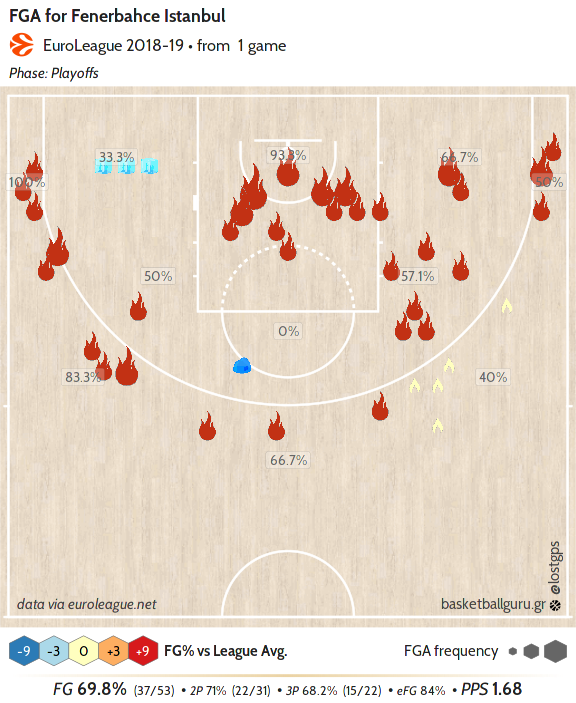 An offensive performance that earned it a crazy 148 of Offensive Rating. For the Zalgiris, it was not enough to repeat that Offensive Rating of 123 of game 2. But do not think that the Lithuanian team did not try limiting Fener in game 4. Probably he tried everything, but the Fener was very close to perfection, also scoring contested shots.

Looking at the chart above, we understand that nothing can be done; also Erik Green enters during the third quarter and puts on an offensive performance above his typical performances.  Fener’s Offensive Rating of the individual matches is 111, 120, 110 and the aforementioned 148. In other words, Kaunas’ defense held the Turkish team below its usual numbers in the first 3 games (average was 125 in the regular season).

For Zalgiris, Davies‘ and Wolters‘ performances have to be highlighted, two players who had done very well during the whole season.

A very good defensive player was Grigonis; however, the Lithuanian player was unable to replicate in the attack. He averaged 3 triples per game but scored only the 17% (in RS 2 attempts per game with the 49%). Some of those triples were also open. In games so tough, they had a decisive weight for the fate of the series. Having said this, the Zalgiris series still remains of the highest level. A season that confirms that the Lithuanian coach is already a praetorian of the sector.

All these stats are available on newstats.eu and my blog.